Home / 1977 • 1979 • 1980 • 1981 • Disco • disconet • Ian Levine • If you Could read my Mind • Music • Nick Straker • The Saint • Viola Wills / Viola Wills the career of a Di …
I’m going to re-post this blog again because it’s one of my most popular since I started this blog years ago.  I’ve added yet another zip which may have doubles of some of the other stuff but as alway, enjoy.  I think it’s worth sharing again for my more recent readers.  This is the third time I’ve refreshed it and the third time I’ve added to it…so get your Viola on!

A lovely songbird left us. She touched me as she did many other disco denizens all through the 80’s. It’s about time I dedicate a blog to her. It’s the longest one for me on Disco Vinyl so far yet. I hope you enjoy it.

DJ Dave Pineda from Toronto recorded a Viola Wills Tribute Mix.  It is in one of the zips above.

WHAT NOW MY LOVE?

It seems as if Los Angeles born and bred Viola Mae Wilkerson was forced to remain in the shadows of more successful disco diva’s like Donna Summer and Gloria Gaynor. Despite recording since the 1960’s and even being active recently with more then 40 years in the business she never had a Top 40 hit in the United States.

Her first success came as a demo singer for Barry White. But once again she was kept back from the limelight she so rightly deserved. I don’t think I ever saw an artist who bounced from one label to another as much as she including among a few, Ariola America, Sugar Hill, Wide Angle, Sunergy, Sedition, ZYX. and Ex-it, and that’s in America alone! 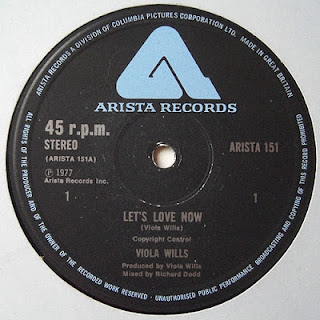 One of her earliest disco releases was Let’s Love Now from 1977.  But it didn’t become one of her best known. I’ve included it in Viola zip 2 or above in case that link dies.  Along with several other Viola 12″.

Viola’s ascent to disco diva success seems to have run concurrently with the opening of The Saint in N.Y.C. in 1980. Where one of her long string of re-makes Gonna Get Along Without You Now was a crowd pleaser.  In fact Viola Wills had a knack for making these re-makes her own and in some cases tackling extremely challenging material.  Her disco version of Gordon Lightfoot’s If You Could Read My Mind became her hugest chart hit remaining five weeks at #2 on the Billboard Disco and Club play chart in 1980.  From there an instant classic was born.  In another Viola zip  I have included the long and extremely enjoyable disconet version and a dub.  The next year heralded the release of I Can’t Stay Away From You another of her lesser known dance releases.  This one I’ve included in a Viola zip below.  In addition to another more on a mid-tempo tip called The More I See You a Hansa records release again back to zip 2.  One of the lesser known numbers yet extremely well produced.

IF YOU COULD READ MY ZIP 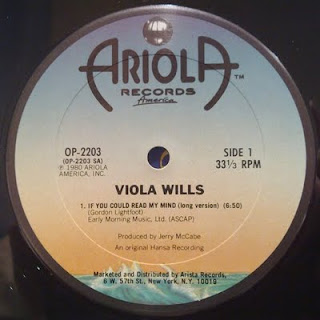 Morning music became a quintessential part of the dance experience at gay clubs like The Trocadero Transfer in San Francisco and The Saint in N.Y.C. and Viola’s 1980 flip-side Somebody’s Eyes proved to be a perfect example of morning prettiness. I’ve included this gem in one zip and the 1986 re-vamp in another. She also covered the Chicago love song If You Leave Me Now but her version kicks up the beat quite a bit and makes it more tea then make-out.

Her second biggest hit on the dance floor was of course yet another re-make her version of Stormy Weather released on Sunergy Records. With this one she shot up to #4 on the Billboard Disco and Dance Chart and made for a perfect tea dance favorite in Provincetown and on Fire Island.

I’m quite partial to her version of the Goffin and King classic Up on the Roof. It has just the right amount of pep and cheer to make for a perfect light-hearted twirl. I just really like Viola’s voice O.K.. So of course I’ve included it in a zip. The same one with the mellow Somebody’s Eyes.

In 1981 her dance version of the sixties hit Always Something There to Remind Me was quite fun. It too can be found in a zip along with Love Transfusion a later release from 1985 which showed a bit of a departure of style and ended up doing quite well in the U.K. As did her version of the Joni Mitchell penned Judy Collins hit Both Sides Now. A rather audacious effort on her part but she pulled it off in true High NRG form.

Probably her most gay oriented releases were her covers of The Saint classic Maybe This Time and the Rainbow Trilogy. Personally I don’t care for these. They just seem over-produced and over the top but in my estimation not in a good way. Though Viola is always Viola and she is phenomenally talented so her bad is better then someone else’s good. Just below is the zip with a couple of these including the test pressing for Walls and the acetate for Maybe This Time.

My last zip includes her version of the Phyllis Nelson classic Don’t Stop the Train. Another one I don’t particularly care for but felt should be here for those of you who can appreciate it. There is also a 1990’s cover of The Pointer Sisters classic Happiness and her take on Yvonne Elliman’s Love Pains which is from 1989 around the same time as the Liza Minelli Pet Shop Boys produced version. Synonymous of Viola’s luck, whose version gets remembered? I also threw in the best mix in my opinion of a recent 2006 house release Enjoy Yourself which isn’t bad along with Starlet d.j.’s featuring Viola Wills Feel You Feelin’ Me a recent U.K. release by d.j. Pete Martinee, in zip 2. Kudos to her for continuing to record and adapt. Refer to any number of no talents who sold a million copies of something only to be forgotten and disappear the very next year. At least our Viola kept coming back with a vengeance.

I will admit I appreciated the 1998 version of If you could read my mind by stars on 54 (amber, jocelyn enriquez, ultra nate) because I like each of these singers individually and think that they have produced many fun dance songs over the years. Here in Italy they even named a motorino after Ultra Nate’s hit Free. So she is yet another example of a dance diva who has gotten more appreciation abroad then in her own country.

Now if only I could say the same for the Studio 54 film. Stick to the book or better still just watch the video of Viola and bring yourself back to the era in your imagination. I recently sold my gorgeous first edition picture book Studio 54: The Legend so if you can pick that up that’s also a great way to get into the spirit.

A 1986 release on Nightmare Records U.K. didn’t make it into any of my other zips so I’ll give it an entry of it’s own. It’s a shame it’s one of the worst Viola songs I have posted.

Written and Produced by U.K.’s own High NRG king Ian Levine it is also one of the very few duets Viola Wills has recorded. This time out with Noel McCalla who also was with Manfred Mann’s Earth Band (but not during their initial 1960’s success as he was only a child then).

Noel McCalla also did lead vocals in the group Mezzoforte who had the 1985 dance release This is the Night. He doesn’t sing the flip-side Garden Party but I think it’s a much nicer graphic.

It includes the vocal version and the dub which I have to admit I like better.

Please click on the ads on my blog.  It’s a way to show your appreciation for the efforts I have gone to for you.